The most iconic film of the 1990s is getting a modern revamp this summer, as the characters of Looney Tunes join forces with another basketball icon for another epic game.

Space Jam: A New Legacy stars LeBron James as a version of himself, who is transported into a virtual world by the sinister tech-based villain AI-G Rhythm (Don Cheadle).

He’ll have to team up with the Looney Tunes crew in some of the wildest basketball matches of his career if he wants to get home safely, with Bugs Bunny, Daffy Duck and Tweety Bird among the characters confirmed to appear.

Lola Bunny, the love interest for Bugs introduced in the first film, will be back with an all-new design and with global superstar Zendaya, voicing the role, taking the place of original actress Kath Soucie.

After much anticipation and curiosity, the first trailer (above) for Space Jam Clothing: A New Legacy hit the internet a few days ago and has generated huge excitement for the project.

The Space Jam 2 preview gives us our first look at the Goon Squad — formerly the Monstars in the original movie — that King James will be battling, à la Michael Jordan in Space Jam. Similar to 1996’s Space Jam, the Good Squad is made up of professional hoopers, including Klay Thompson, Anthony Davis, Damian Lillard, Diana Taurasi, and Nneka Ogwumike. Thompson’s Warriors teammate Draymond Green is also expected to appear in the movie.

The film hits theaters and HBO Max on July 16 for the US and July 23rd for the UK.

CURRENT CAMPAIGN We are extremely proud and grateful to join the fight to halt the spread of Covid-19 by helping support and protect our NHS. With key workers and people on the frontline being at the heart of the HYPE. family, this is something that ...

TIPS FOR A SPRING WARDROBE

The weather is starting to warm but we’re having to spend more time than ever indoors. However, on the bright side, it’s the perfect time to give you some spring inspo. What better place to start than your wardrobe? We’ve rounded up our top fiv... 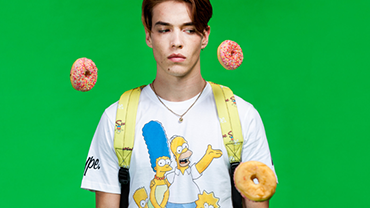 HYPE. X THE SIMPSONS “I feel like I want to be Bart but now I’m getting older I’m turning into Homer,” – HYPE. Senior Designer, Farley Vaughan. Inspired by America’s favourite animated family, we created a sell-out collection. With Homer...